Ike Rises to Top on Delware

Ike Rises to Top on Delware

As a Philadelphia native, Michael Iaconelli is a natural fighter. After the first day of competition on the Delaware River Ike would have to fight his way back from 21st place. That is exactly what the Abu Garcia pro did, and he didn't look back. The hometown crowd went into a frenzy as Ike hoisted the B.A.S.S. Elite series trophy over his head, ousting fellow Abu Garcia pro Chris Lane by eight pounds. 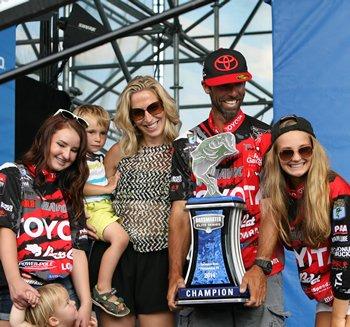 For his effort, Ike once again captured the fighting spirit of Philadelphia and a nice payout of $100,000 and an instant qualification to the 2015 Bassmaster Classic.

"This is a great feeling to know the Classic is sewn up. Having a Classic berth is a very important thing," said Iaconelli, who would have had an uphill climb to clinch an entry into the world championship through points earned at each event."

Ike has eight Bassmaster wins on his pro resume, which includes another Elite trophy on Alabama's Lake Guntersville in 2006.

The 2012 Classic champion, Chris Lane of Guntersville, Ala., finished in second place with 39-14 pounds.

Throughout the week, Ike relied heavily on Abu Garcia gear to fuel his victory. "Without a doubt a key advantage was having gear that held up," said Iaconelli. "I was using a combination of Abu Garcia Veracity and Veritas casting rods paired with the Revo MGX reels. I've had a ton of success with these set ups and haven't had any hitches in the performance from season to season."

The next stop for the Elite Series is Aug. 21-24 at Cayuga Lake out of Union Springs, N.Y. The event, the A.R.E. Truck Caps Bassmaster Elite at Cayuga Lake, will be the final full-field event of the season.