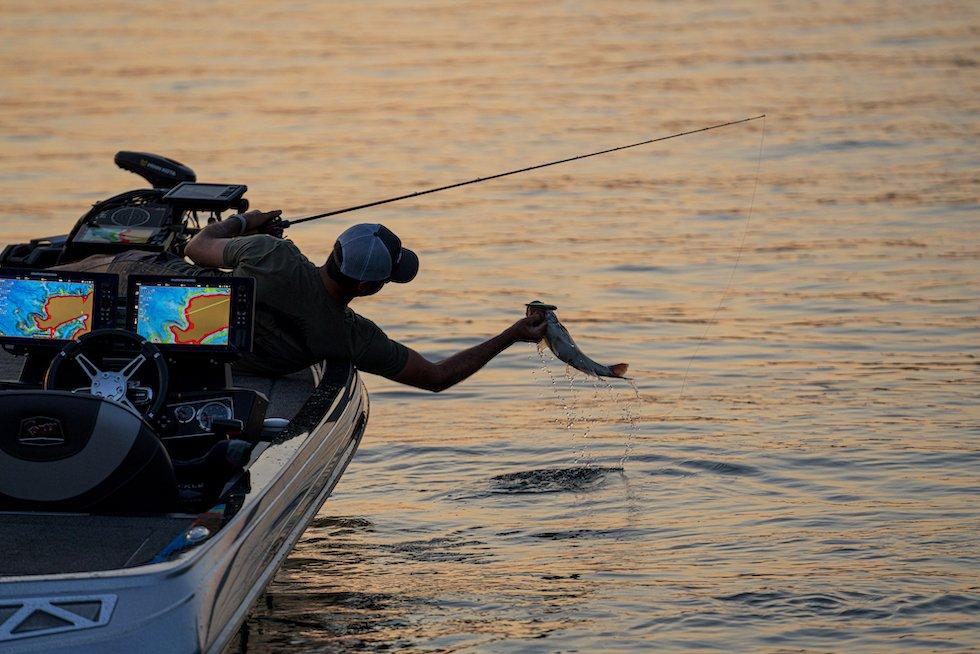 As bait moves offshore throughout the summer, bass follow suit. As the bait collects, so do the bass. Schools of bass group together and use their numbers to disorient, divide and conquer their prey. With scarce cover available, the baitfish end up with their backs against the proverbial wall… or in this case, the ceiling. With nowhere else to go, the bass explode on the bait along the surface, creating an opportunity for the eager angler. However, the wrong equipment quickly turns excitement into agony.

What not to do 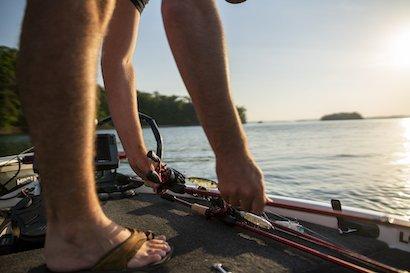 Fishing for schooling fish is extremely exciting. Catching them, even more so. But getting caught chasing schooling fish can be the most frustrating thing you’ll ever do with a rod in your hand. When an angler decides to move offshore and target schooling bass that are chasing herring or shad, it often seems like the fish continually surface just out of reach.

With nothing else around in the open, typically clear water, a bass boat is about as alarming to the bait and the bass chasing them, as the fin of a shark cruising down the shoreline at Panama City Beach. Add to that the noise of depth finders, trolling motors and the typical fishing partner who stomps around the boat like he’s on roach killing patrol, and it’s easy to see how your presence can be felt by all the aquatic inhabitants in the area.

Now if you have your topwater rigged up on the 7-foot, medium heavy rod with 15-pound test monofilament that you've been cruising the shallows with, the chances of you planting your topwater in front of a busting bass dwindle to nearly nothing. You’ll instead spend an hour with your trolling motor on 100 watching helplessly as bass break the surface all around you. 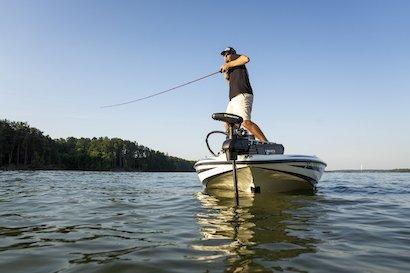 Instead, you want to be as quiet in the water as possible in order to minimize the fish’s ability to feel your presence as much as possible. And it’s important to be patient. If the fish were busting where you are but left about the time you arrived, wait. The bass will usually chase the bait right back to you.

Often the only thing the bass can use to corral the bait offshore, other than their numbers, is the topography. If you look down at your graph, you’ll usually be able to identify some variation in the bottom contour near where the fish were pushing the bait to the surface. And they’ll be back shortly to use it again. But if you instead move to where they currently are, you’ll find yourself chasing ghosts all day.

You also have to maximize your strike zone when fishing for schooling fish offshore. With the right rod, reel, line and lure, you can double or even triple the area you can cover compared to the wrong setup. Pairing a 7-foot, 4-inch medium heavy Abu Garcia Veracity Casting Rod with the low profile Revo Rocket greatly extends the distance your bait can travel. Moving from monofilament to a smaller diameter 40-pound braid allows you to pack more line on the reel. And lastly selecting a bait as large as possible, like the Berkley Cane Walker, completes the package and gives you the greatest range possible.

But with range comes responsibilities. That’s where the Revo Rocket and braided line shine. It’s the braid’s responsibility is to ensure a good hookset with so much line out. The low stretch characteristic of braided line does just that. And it’s the reels responsibility to burn the bait in and reassert it in a different direction when the fish inevitably surface somewhere else mid-retrieve. 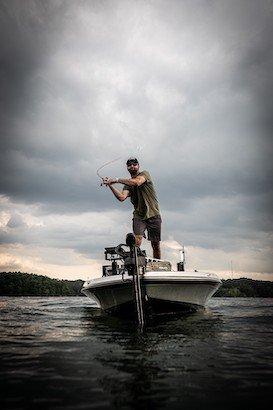 The 10.1:1 gear ratio of the Abu Garcia Revo Rocket offers the unprecedented opportunity to minimize the most frustrating aspect of targeting schooling fish. Without fail, and numerous times throughout the day, you’ll stand around and wait for the fish to surface, finally cast after not being able to stand the suspense any longer, only to have fish blow up in a completely different direction with your bait still in the air. Snatching in 41-inches of line with each revolution of the handle, the Revo Rocket is the perfect fit for this style of fishing as it allows you to quickly retrieve your bait and make the next cast.

Though the need for speed makes reel choice extremely critical, the importance of the right rod cannot be overstated either. Too short of a rod makes those long bomb casts impossible. Likewise, too soft of a rod shortens the achievable distance and limits your ability to set the hook even with braid. Too stiff of a rod and you’ll take the bait away on the initial swipe or rip the hooks from a fish during the fight.

The rod you choose needs to be fairly long and have enough backbone to set the hook from way out, but also be short enough and have enough tip to make those long bomb casts and work the bait efficiently. That’s why a rod in the 7-foot, 4-inch medium heavy realm like the Veracity is best suited to the task.